The aim of this project and website, is to aspire to further the knowledge of our combined family history. Recently we turned our attention to a family surname, of which I share, “Wharton”.  The Wharton family has been researched to some degree, with several publications detailing John & Fanny Wharton and their descendants with a fair amount of accuracy.

The only problem is these previous efforts appear to begin and end with this couple, so Gary and I wanted to expound upon the Wharton family line in an effort to further understand and determine their origins, starting with determining John’s parents if at all possible.

(John Wharton was the father of Harriet Wharton [1], the wife of Owen Stanley. {See the other articles on this website regarding Owen Stanley and his Boswell family origins. [2] [3] [4]})

DNA test results show that my Y chromosome does not match the well-documented haplogroup H1a which, in a direct male descendant, indicates a link to the Romany’s origins in Northern-western India. Therefore, we can assume that at some point a Wharton male married into a family of Romany, taking on the lifestyle and integrating deeply into the family line over generations. The question we have sought to answer, was when did this happen, and was John Wharton the male Wharton responsible?

The short answer to the last question? It appears he wasn’t.

The spelling of Wharton can vary widely, some examples include Wharton and Worton, as well as Warten, Warden. Whorton, and Worden (among others). It is important, as I have seen some do, not to get caught up on how the name is spelled. Many of these spellings are the result of the recorder, transcribing the name they hear phonetically, and often, incorrectly. As a result, an individual can have several documented spellings of their last name at different times. These variations are not often the result of intentional name changes, you need to bear in mind that many couldn’t read, write or spell their own name to begin with.

For the sake of simplification, we will use the spelling Wharton in this article going forward.

Additionally, John’s son, Gilderoy Wharton, was also jailed in Somerset in 1821, along with his brother-in-law Owen Stanley. With this information, we can extrapolate a possible date of birth for John’s father and begin to search …

In the Wharton family, there are a few unusual biblical names that are reused over the generations. The names of interest are from the book of Daniel; As the story goes, three Hebrew men, Shadrach, Meshach, and Abednego, were protected from harm after being thrown into a furnace by King Nebuchadnezzar.
John baptized a Meshach in Dorset, in 1805 [13]. John’s son, Gilderoy Wharton, had a grandson named Meshach Shadrach Abengo Wharton (b. 1873), who also used the namesake when naming his son Shadrach Meshach Abenego (b. 1897).

These unusual names helped lead us to a family of Whartons in the Sussex area, in the late 1700’s. Was this family related to John Wharton, and were they potentially Romany?

The family of John and Ruth Wharton

In Sussex, a family of Whartons named three sons after the Hebrew men from the book of Daniel. In Rudgwick, Sussex, England in 1784, John and Ruth Wharton baptized a Meshech Warton [14]; In Balcombe. Sussex (an area they appear to have frequented often or perhaps settled), they baptized a James in 1781 [15], and a Shadrach and Abednego in 1786 and 1792 [16] [17], respectively.

These events occur later than our approximate birth dates for John Wharton (1765-1770) by some margin. It is also unclear if they were Romany/Travellers, as it is not stated in any records and there is no indication of occupation. Initially, it appeared that this was an unrelated family, despite the unique names, until we looked a little further. (From now on we will refer to John, husband of Fanny as John 1 and John, husband of Ruth, as John 2 when it isn’t clear) Unfortunately, we do not find a baptism for John 1 to John 2, but we do find some interesting information to consider a connection possible; We were able to find baptisms for more children of John and Ruth …

A daughter of a John & Ruth, Dinah Wharton, was baptized in Crowhurst, Surrey, in 1777, with a note attached to the record, the parents were listed as “Travellers” [18]. While this wasn’t in Sussex, but Surrey, Crowhurst and Balcome are less than 14 miles apart. Also, importantly, the dates are getting closer to John 1’s approx. birth of around 1765/70. Dinah as a forename is also of note; it is another name that is carried through and used in several places down the Wharton line.

On March 18, 1776, it was recorded in Easebourne, Sussex, of a marriage between a John Wharton and Ruth Wheeler [19]. John Warton was listed as a “sojourner” in the Parish. This is noteworthy as not only does this appear to place John as a traveller, but we are also provided with Ruth’s maiden name – Wheeler. However, this places a marriage of 1776, well after the proposed birth dates for John 1.

Fortunately, another baptism turned up that we believe is the same couple. Samuel Warden, baptised April 8, 1775 in Alford, Surrey to John Warden and Ruth – again, listed as “Travellers” [20]. So this opens up the possibility that John and Ruth were together before what appears to be their marriage in 1776; not something uncommon in Romany & Traveller partnerships.

Having found Ruth’s maiden name, Gary’s thoughts were that either John’s parents were originally travellers or perhaps Ruth’s were, as it was doubtful that they just took to travelling without some sort of family history of it. Sure enough, In Easebourne, Sussex (the same location where John and Ruth were married), we discovered a Ruth Wheeler being baptised some 29 years earlier to parents John & Elizabeth Wheeler, on March 27, 1747 [21] … Importantly, they were also noted as being “Travellers”.

(As a side note, we thought it worth mentioning here that the surname “Wheeler” appears to have become quite a prominent Traveller surname later in the 1800’s, especially in and around the Sussex, Surrey & Kent counties of the UK. Their links, Gary is still in the process of investigating.)

John and Ruth both appear to be buried in Balcombe, Sussex (the location of several of their children’s baptisms), John in 1880 and Ruth in 1825.

Considering John 1 was likely born 1765 to 1770 and Ruth could have been born no later than 1747, and could have been as far back as 1740, these ages at their extremes, would make Ruth no younger than 18 years of age when John 1 was born. John is a very common forename, and naming your oldest son after the father and/or grandfather was and is still common place. So it begs the question, did John and Ruth father John Wharton, husband of Fanny Stanley (her assumed maiden name)?

Consider that each of these families of Wharton used names such as Dinah, Abednego, Shadrach,and Meshach. We have also been able to establish that each family appear to have been Travellers or listed as such in records. Dates of baptisms for John and Ruth’s children that we can find start in 1775, so did they have more children prior to this, that weren’t baptised or at least we cannot, as of yet, find the documentation for?

Unfortunately, we cannot find direct proof in the records that John 1 was the son of John Wharton and Ruth Wheeler, but this possibility should be given serious consideration… 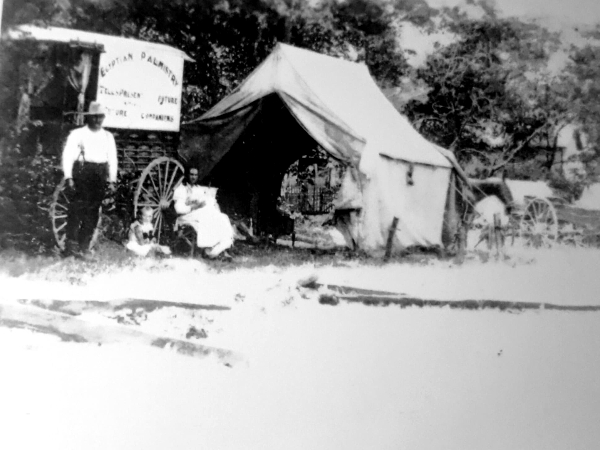